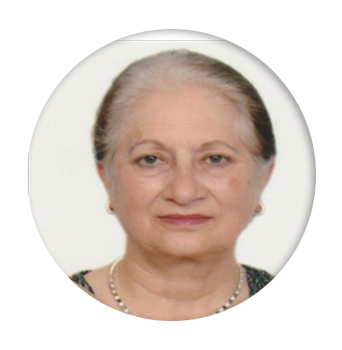 MRS. NIGHAT SHAFI CHAIRPERSON Mrs Nighat has been an honorary Member of the Board of Directors of the J&K State Women Development Corporation since 2010. She is also working in an advisory capacity with reputed organisations at the state and national levels including Ford Foundation, AFPRO (Action for Food Production), J&K State Women Commission, J&K State Rehabilitation Council, Kashmir Women Credit Co-operative Ltd, and the National Commission for Protection of Child Rights. Her determination in facilitating peace building and harmony in conflict areas has been reflected by her engagement with organizations like Centre for Dialogue & Reconciliation, Delhi Policy Group. Additionally, she and her HELP Foundation, in collaboration with an internationally reputed organisation, MANFORD, has been organising workshops of functionaries involved in the process of governance both in government and private sectors, for bringing about appropriate behavioural orientation for facilitating the process of sustainable development and peace building in the region. Awards and Accomplishments: For her bold initiatives and social activitives in the conflict region, Mrs Nighat was selected as one of the 1000 women around the globe nominated jointly for a Nobel Peace Prize under the 1000 Peace Women Project in 2005. At national level, she has been honored with numerous awards inclduing Stree Shakti Award (Women Empowerment Award) by the Government of India consecutively for three years during 2005-06 to 2007-08, Asian Peace Award and Mehjoor Award in 2007 and 2010 respectively and Jamnalal Bajaj Award for distinguished social work for the development of women and children for the year 2012. Founder and Chairwoman of HELP Foundation since 1997 Started a Women Credit Cooperative Bank for micro-financing in 2006 Serves on the Boards of J&K State Women Commission, Women Development Corporation, Chinar, Advisor of Anhad, Ford Foundation Fulbright Selection Committee, Advisory Board of Prasad Bharti (Media), J&K Rehabilitation Council, Member of Women Study Centers Nominated for Member of National Commission for Children Rights with therank of a Secretary to Govt of India (declined) HELP Foundation was recognized and commended by J&K state as one of the bestrun organizations in 2008 Received the Stri Shakti Award from Govt of India for empowerment of women in India in 2008 Received Asian Peace Award in 2007 Nominated for Nobel Peace Prize in 2005 under 1000 Peace Women Across the Globe Educated in Kashmir with a Bachelor degree in Economics from J&K University Married to M.S. Pandit, a senior government official who retired this year with the rank of a Secretary to the Govt of India and served as Chairman of the prestigious Public Service Commission Three adult children living in UK, Dubai & US with four grandchildren

She is an educationist by profession

He is a retired Government Employee worked as Financial Advisor

She is an entrepreneur

She is a doctor by profession

She is a doctor by profession